Slowly, over the next few weeks, we taught each other. With a bit of help from the kindness of strangers on the internet, message boards, and trial and error, we began to understand each other.

Over the next few months, Angel mentored several deaf puppies that have either been adopted or stayed with us as family members. Three short months after her arrival, she accepted tiny Zippy as her own, taught him pack manners, people manners, the doggy door, housetraining, and babysat him and kept him out of trouble. Zippy was fear and food aggressive at eight weeks of age, and Angel saved his life by mentoring him. He is now forever family here, and welcomes and mentors new underage puppies in our home for socialization, carrying on Angel’s legacy here.

It took us about a year to find the perfect forever home for Angel. She had a very wonderful family that cherished her until she passed in February of 2018.

I drove to the shelter to pick her up. While buckling her into the seat belt, I noticed Angel staring at me with a peculiar look on her face. I dropped the arm that was protecting my face for a possible bite from a scared dog.

Angel’s tongue licked me slowly and tenderly from the bottom of my chin to the tip of my nose. She paused to make sure I got the message, making direct eye contact with her beautiful green eyes. Boy, did I! That very poignant thank you melted my heart and brought a smile to my face. Slowly and deliberately, she did it again.

After the second thank you kiss and her eyes met mine, I was absolutely smitten. She communicated with me in a much deeper way than any dog ever had. She made sure I got the thank you message and understood it. She literally read my face.

The first week was hell. Angel didn’t care for the crate, and screamed to voice her displeasure. We were both frustrated at our inability to communicate. 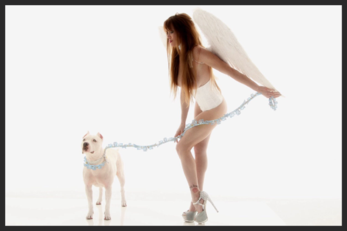 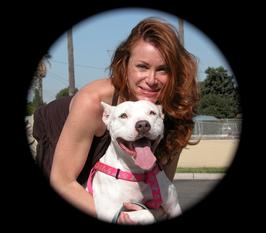 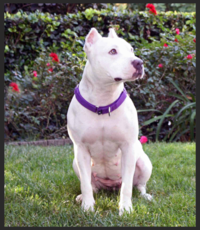 How did we start rescuing deaf dogs?

Most rescuers have one dog that changes the course of their lives forever. For us, that dog was Angel, who set us on a path to rescuing deaf dogs. We have been rescuing dogs since 2001, deaf dogs since 2009.

We used to operate a non-profit low cost spay and neuter mobile van that traveled to surrounding areas to fix dogs and cats. The pets also received a free microchip when they were sterilized to help them get home safely if they were ever unfortunate enough to end up in a shelter or be found as a stray. We were contacted by a rural shelter for microchip information for a deaf white female pit bull who was picked up as a stray. Her owners were contacted, and they did want their dog back. They weren’t willing to pay the shelter fees to redeem her.

Angel, formerly known as Chata, was at risk of euthanasia due to space at the shelter. We offered rescues a donation to take her, and nobody was willing or had room. There weren't very many rescues willing to take deaf dogs at that time.  We were unable to secure a safe spot for her. One of our fellow rescuers said “She is coming to you for reason…..take her”. 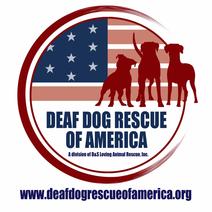